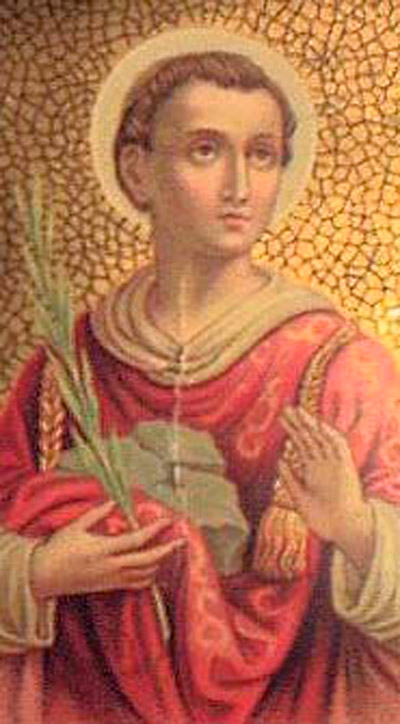 Meet St. Stephen the Martyr. Stephen was chosen by the Apostles as the first of seven deacons, and he became the first Christian martyr. He was a man filled with faith and the Holy Spirit, who worked miracles among the people, bringing many to join the followers of Jesus (Acts 6-7). Those who debated him were no match for Stephen’s grace and wisdom. Then, like his Lord Jesus, Stephen was falsely accused of blasphemy and brought before the Sanhedrin. Before his accusers, Stephen spoke eloquently, recalling that God had guided Israel’s history, even despite its disobedience and idolatry. He ended with a stinging indictment: “You stiff-necked people…you are always resisting the Holy Spirit, just as your fathers did before you.”

The entire assembly raged against Stephen, who “filled with the Holy Spirit, looked at the sky and saw the glory of God, and Jesus standing at God’s right hand. ‘Look!’ he exclaimed, ‘I see an opening in the sky, and the Son of Man standing at God’s right hand.’ They dragged him out of the city and stoned him to death. As he was being killed, he prayed, ‘Lord Jesus, receive my spirit…Lord, do not hold this sin against them.'”

He died at the hands of the mob, his eyes courageously fixed on God and a prayer of happy forgiveness on his lips. His death (34-36 A.D.) marked a new foundation for the early Church.

The Church has set aside December 26th to celebrate the holy life of St. Stephen the Martyr.