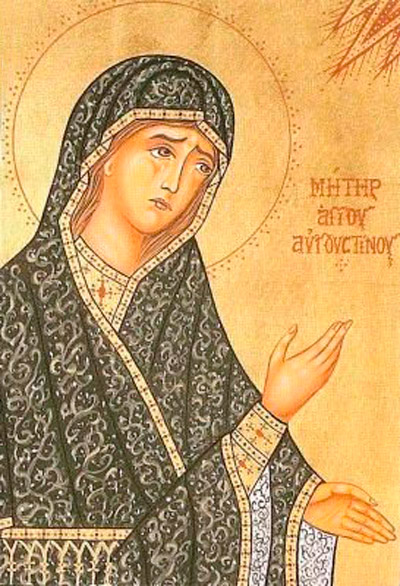 St. Monica was born of a Christian family in North Africa about 331 A.D. When she was 17, her parents arranged a marriage of convenience for her to 40-year-old Patricius, a pagan who mocked her faith and resented her refusal of his dissolute ways.

They had three children together, including the brilliant Augustine. As a young adult, he embraced heresy and a reckless lifestyle, taking a mistress and fathering an illegitimate son. Monica increasingly turned to her faith for strength and consolation.

Through her perseverance in prayer, her husband Patricius was baptized shortly before his death. Her son Augustine surrendered to the Lord at age 33, a decision he credited to his mother’s tears, prayers, and constant, but loving, nagging.

In his Confessions, Augustine wrote, “In her piety, [my mother]…began to dread that I might follow in the crooked path of those who do not keep their eyes on you but turn their backs instead. …. How presumptuous it was of me to say that you were silent, my God, when I drifted farther and farther away from you! …Surely the words that rang in my ears, spoken by your faithful servant, my mother, could have come from none but you? …I thought that you were silent and that she was speaking, but all the while you were speaking to me through her.”

The Church has set aside August 27th to celebrate the holy life of St. Monica, and the next day, August 28th, to celebrate that of her son, St. Augustine.